Readily recognized by its distinctive 911 Carrera T script, which is emblazoned on its rocker panels and on its rear bumper surround, the T's appearance is accented by its Agate Grey SportDesign exterior mirrors, its Titanium Grey wheels and by the black tips of its standard equipment Sport Exhaust System. The rear decklid louvers are also Agate Grey as is the aforementioned Porsche logo. An aerodynamically optimized front spoiler lip that's part of the PASM Sport Suspension offers another clue to the T's identity.

loops that replace the usual door handles, a combination that knocks 11 pounds off the base 911's weight. Opt for the $5,200 full bucket seats and say goodbye to the heavier standard-issue 4-way power sport front seats as well as the rear seats and bring the total weight down another 33 pounds making the Carrera T feel really frisky. By the way, in choosing the bucket seats, you must also buy the $910 GT Sport steering wheel, which along with the shift lever is trimmed in Alcantara.

Twenty-inch diameter Carrera S wheels are standard, as is PASM Sport Suspension with 0.39-inch (10-mm) lower ride height. A shortened gear shift lever similar to the 911R or Cayman GT4 features an embossed shift pattern in red, while the headrests of the standard Sport Seats Plus with Sport-Tex clad seat centers, are set off by a black 911 logo. The standard, leather-trimmed GT Sport steering wheel is fitted with a switch for selecting the driving mode. Although the dashboard and doors of the standard T are trimmed in black, an optional Interior Package (pictured below) offers buyers a choice of trim colors including Racing Yellow, Guards Red and Racing Silver. 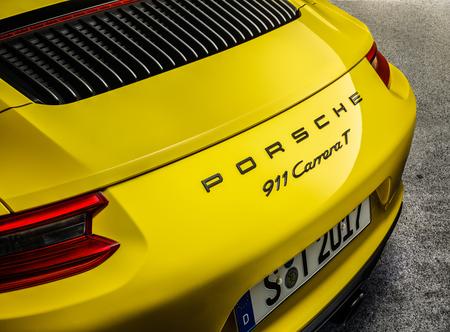 It's all about the feel behind the wheel 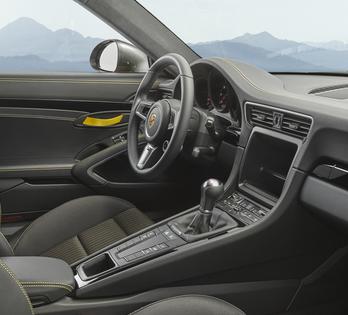 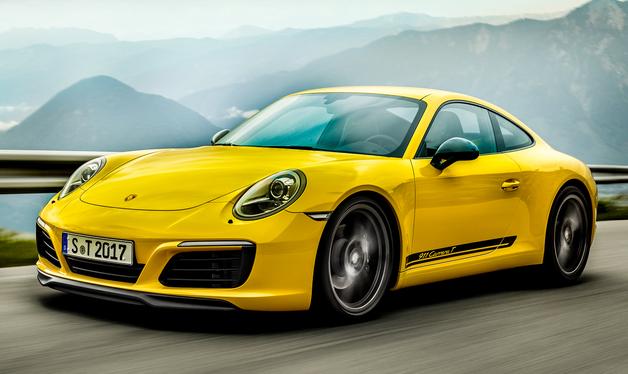 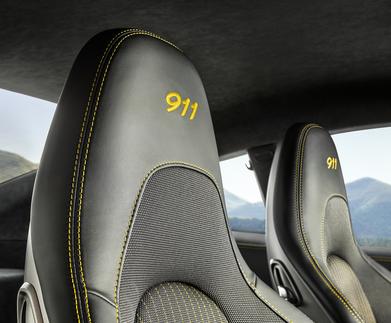 Designed to appeal to the cost-conscious Porsche purist who enjoys the visceral feel of your basic 911, the Carrera T strikes a familiar chord, but doesn't play the entire melody. In other words, it's no GT3 or a 911R. Heck, as performance numbers go, it's not even a Carrera S, which goes from 0 to 60 in 4.1 (versus 4.3) seconds and tops out at 191 (versus 182) mph. In fact, if you really want to pick nits, the T's top speed is one mile per hour less than the base Carrera's. That's most likely because of the T's marginally lower gearing, which slightly improves acceleration and certainly makes for a more lively feel. And feel is what the Carrera T is all about: the perception of performance. Looks help too, and the T's distinctive markings, plus specific interior fitment (front bucket seats, no rear seat, for example) add to the mystique.

Sensibly equipped, the Carrera T, which will sell for $102,100 plus delivery and handling when it goes on sale in March 2018, can be a smart purchase. However, options abound and while the rear-axle steering and the bucket seats mentioned earlier make sense, from a purist's point of view, swapping the manual 7-speed transmission for the $3,730 PDK automatic, seems almost sacrilegious, even if the automatic, used in conjunction with Porsche's launch control feature, is 0.3 seconds quicker from 0 to 60.

Speaking of options, for customers who won't be satisfied with the Carrera T's standard colors -- Black, White, Guards Red and Racing Yellow -- $720 buys you a silver, black, or white metallic paint job, while $3,150 gets you a choice of two special colors, Lava Orange or Miami Blue. Personally, I'd go with Racing Yellow because it looks fast. And isn't that what really counts? 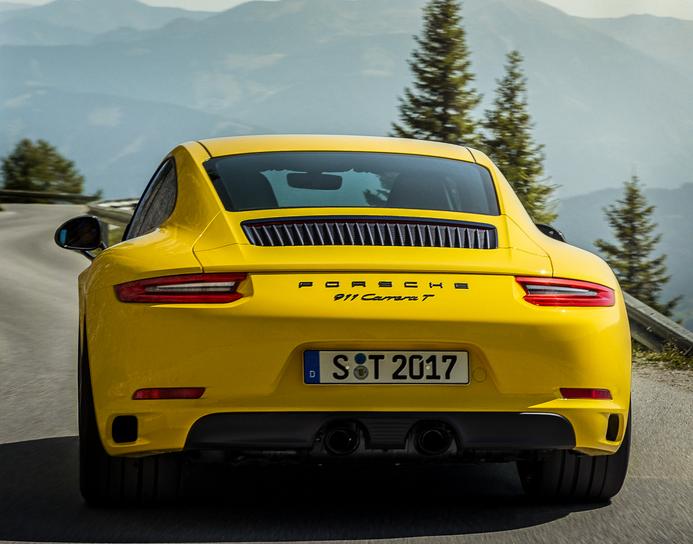 A mechanical limited-slip rear differential, unique to the T, is standard, while rear axle steering is a $2,090 option that makes sense in a lively rear-drive car, especially the T, which at 3,142 pounds, is the lightest Carrera model, thanks to rear side windows and rear backlight made of lightweight glass, reduced sound-deadening insulation and door pull

​​​​​​​​If you're a Porsche purist, the kind of person who eschews automatic transmissions, creature comforts and electronic gee-gaws and longs for the days when 911s were pure automobiles that played to the senses, then Porsche has a car for you. It's called the 911 Carrera T, as in Touring, an assignation that's been dormant since 1973 when the last 911 T was built. A sort-of stripper model, the early car was first slotted between the 912 and the 911, but ultimately became the entry level 911 at the time of its demise. The new Carrera T, not to be confused with the 911 GT3 With Touring Package Porsche introduced a few weeks ago, is positioned between the base Carrera and the S, and is a bit of both. For example, its 3-liter twin-turbo, 370-horsepower flat-6 comes from the base Carrera, while the 7-speed manual transmission (or optional 7-speed PDK) is an S component. Why use an S transmission when the gear ratios of all Carreras (but not the Turbo) are the same? Because the constant transaxle ratio, essentially the ratio of the input shaft to the output shaft of the S gearbox, is lower, which marginally improves the T's acceleration and makes the car feel quicker, even though its 4.3 second 0 to 60 mph time is only a tenth of a second better than the base Carrera's.