And go Luftgekuhlt, which has grown to become what is arguably the biggest event of its kind in the world, a people -- and entrant -- friendly car show without the pretentiousness of a concours. Kids, accompanied by their parents, are welcome and so are pets. More about the latter in a moment when Patrick weighs in on our canine companions. Until then, let's get back to Luftgekuhlt, which has grown by leaps and bounds, making it a planning and logistical challenge. Where does one put some 650 Porsches and handle several thousand spectators that needed to be shuttle-bussed to the event because Ganahl

If you're one of those traditionalists who believes that a proper Porsche should be cooled by air and not water, then you'll feel right at home at Luftgekuhlt, a Southern California style mashup of the vaunted (and some say haughty) Pebble Beach Concours d'elegance and say, Cars and Coffee.  There are no manicured greens and no ocean view at Luftgekuhlt. In fact, this year's all-air affair was held in a lumber yard with a fine view of a refinery. But that's all part of the event's schtick. Or to put it another way, it's urban, mostly millennial and definitely social-media driven, which is not surprising since Luftgekuhlt's co-founder, Patrick Long, is 36 years old. When not plotting next year's event with art director/designer Howie Idelson, Patrick is gainfully employed racing the Wright Motorsports 911 GT3 R in IMSA's WeatherTech Sportscar Series, in which he is the only American with a Porsche factory ride. Go Long!

Lumber's mill yard, roomy as it is, couldn't hold hundreds of spectator vehicles. Those were some of the devils lurking in the details. Suffice to say, Long, Idelson and company pulled it off again, and while the lines to get in and to buy food were long, the courteous staff kept things going smoothly. As for the cars: suffice to say, if Porsche built it and it's air cooled, chances are it was on display at Luftgekuhlt, amidst gigantic stacks of lumber. Feature cars such as Jerry Seinfeld's Gmund coupe, George Follmer's 1972 Can-Am-winning 917-10, Bruce Canepa's customized 959 and other select racing showpieces, some displayed indoors, wowed the crowd and provided welcome shade. Fortunately, a refreshing sea breeze made viewing of 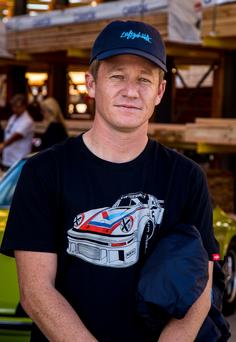 ​lesser road cars enjoyable. Arranged by model type (356, 911, 930, etc) they were parked outdoors, sprinkled throughout the expansive, newly opened complex. All cars were accessible, even touchable. Which brings us back to what Long said earlier in a TV interview. Asked what mishap he feared most at Luftgekuhlt, Patrick came right to the point. "Dogs," he quipped. "When you've got cars that cost more than a million dollars each on display, you worry about dogs peeing on 'em" 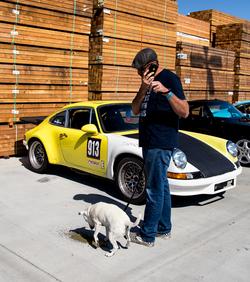 Duly noted. Now then, it's been said that "one picture is worth a thousand words," so I'll cut to the chase, or to the Photo Gallery, which features a selection of notable or at least interesting Porsches -- like the customized 356 coupe powered by a Polo motor. See if you can find it. Meanwhile, for those who treasure the written word, clicking on the blue button below will send you back to 2016 and the story on Luftgekuhlt 3, in which I describe in detail how this homage to aircooled Porsches came to be. 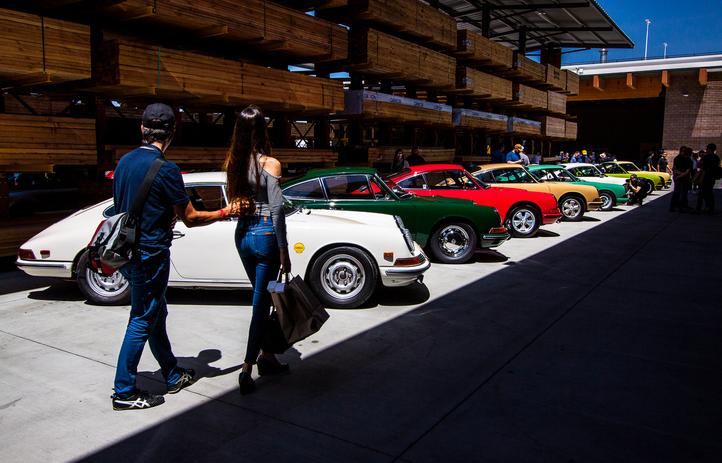