​               Actually, the team approached the record run with only modest expectations. "At the start of the development process, we set ourselves a lap time target for the GT2 RS of less than 7 minutes and 5 seconds," said Frank-Steffen Walliser, vice president of motorsport and GT cars. "The credit for beating this target by 17.7 seconds goes to ​ 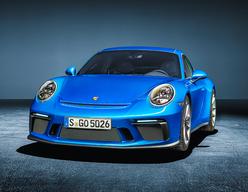 King of the 'Ring

​our development engineers, mechanics and drivers, who demonstrated an exceptionally strong team performance."

​                Unlike many other cars that have set records at the 'Ring, the pair of GT2 RS coupes driven by Kern and Tandy were not track cars like the one-second slower Radical SR8 or the four-seconds faster McLaren XP1 LM prototype that were not certified for street use at the time they set their respective class records. Nor were they full-blown race cars like the Porsche 956 GTP racer, driven by the late Stefan Bellof, whose 6 min.,11.13 sec. run stands as the fastest lap ever recorded at the Nurburgring. Rather, the factory's two 911s were registered for road use in the EU and are just like those available for purchase by anyone with $293,200 burning a hole in their pocket. By the way, both cars participating in the record run were fitted with Porsche's Weissach Package, a $31,000 option that includes forged magnesium wheels shod with Michelin Pilot Sport Cup 2 'N2' tires and carbon fiber front and rear anti-roll bars and end links, a combination that pares 39.7 pounds off the cars' overall weight. A Porsche Motorsport bucket seat with appropriate safety harness replaced the stock seat/seat belt setup, while the standard-issue Infotainment system was deleted -- presumably to save weight and not so the drivers wouldn't be distracted by music or traffic reports.

Judging by Porsche's video of Kern's early morning record run, Lars, who races in the Porsche Cup of Australia and is intimately familiar with every twist and turn of the Nurburgring, had his hands full horsing the 700 horsepower turbocharged, rear-wheel-drive beast around the track dubbed "The Green Hell." Not to sound too risque, but I'd say that Kern and Tandy have what you might call, TBO (two big ones), anatomically speaking of course. 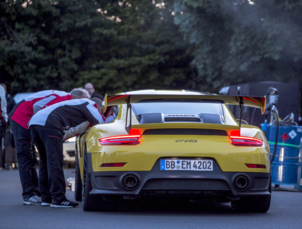 It's no longer just "the most powerful street-legal 911 model of all time." It's also "the fastest Porsche 911 of all time," thanks to the efforts of a superb team and two talented factory drivers including Lars Kern whose 6 minute, 47.3 second lap of the Nurburgring's 12.8-mile road course set a new record for street legal, fully licensed production cars, eclipsing by 4.76 seconds the mark set almost a year ago by a Lamborghini Huracan.

Although Kern set the fastest lap, factory shoe Nick Tandy, who flew straight to the 'Ring from Austin, Texas, after competing in a six-hour World Endurance Championship race there, teamed up with Lars to rattle off five, under 6 min. 50-sec. laps that underscored the consistency of the effort. "We're particularly proud of the fact that this was achieved with two different vehicles and two different drivers, as this underlines the GT2 RS's ability to reproduce this record result over and over again," said Andreas Preuninger, director of the GT model line. 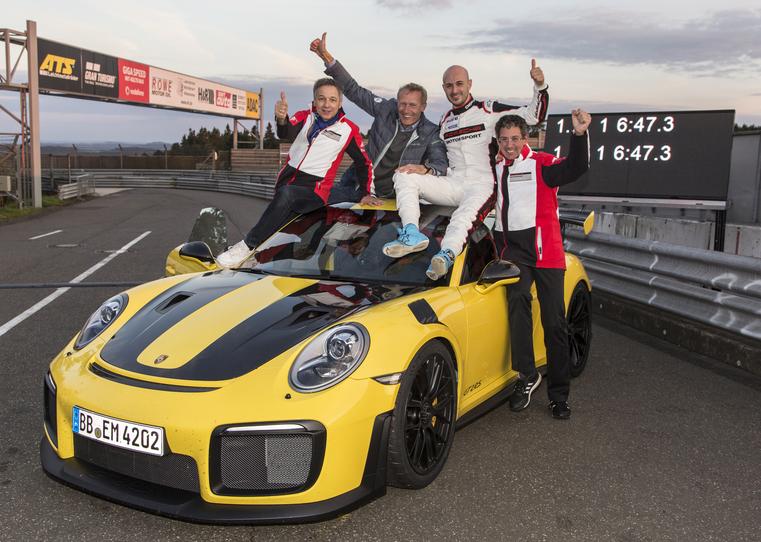 Curiously, based on what I observed watching Porsche's exciting and entrancing video, which displays the car's speeds and gears, the record-setting GT2 RS reached a top speed of only 193 mph (310 kph) in 6th gear as it hurtled toward home down the Ring's longest straight. That's 18 mph less than the model's advertised top speed of 211 mph (340 k). Of course, speed readouts aren't always accurate,and I'd like to know what misters Eugen Oberkamm, Preuninger, Kern, and Walliser (left to right, shown below putting a dent in the 911's roof) have to say about that. Meanwhile, enjoy your 15 minutes of fame, guys. On second thought, better make that 6 minutes, 47.3 seconds. 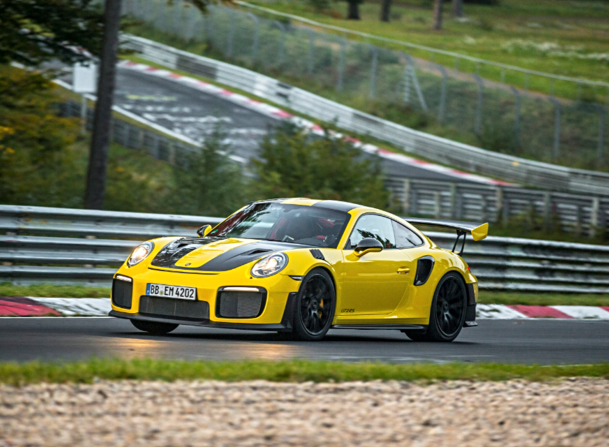 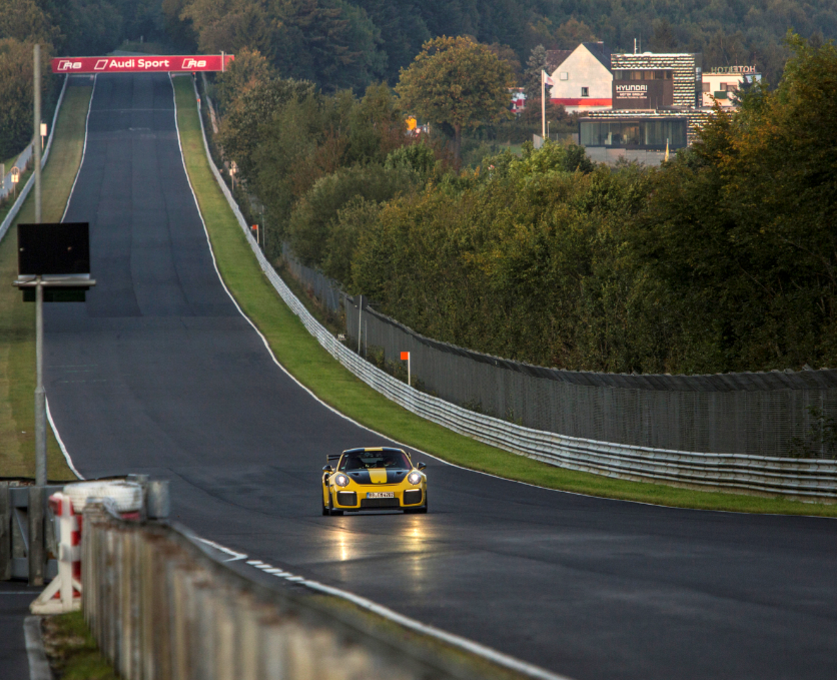