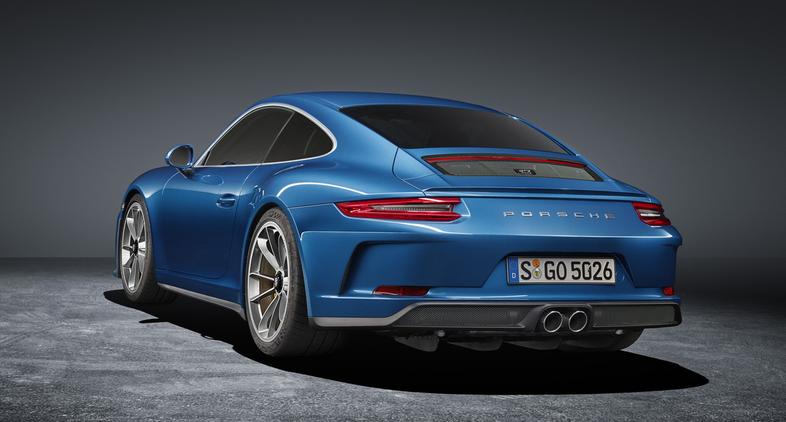 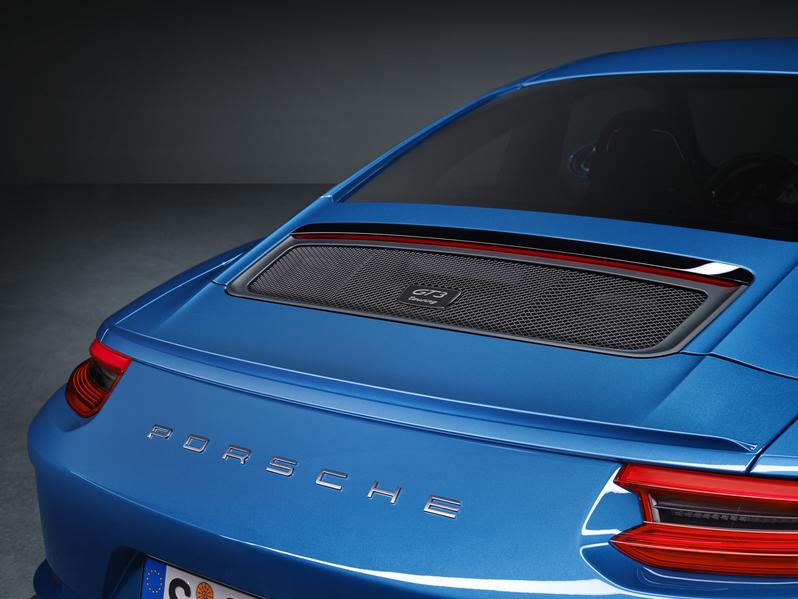 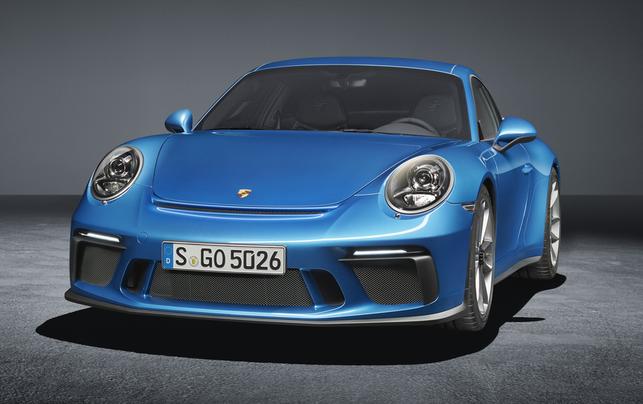 Like the engine, the new T's body, chassis and running gear are essentially the same as the GT3's. Both models are based on the body of the 911 Carrera 4, which is 1.7 inches wider than the Carrera 2 at the rear wheel arches. Ride height is about an inch less than the 911 Carrera S. The T, which shares the GT3's center-lock forged-alloy wheels (nine-inch-wide fronts, twelve-inch- wide rears fitted with 245/35 ZR 20 front, 305/30 ZR20 rear tires) and rear-axle steering that, depending on the vehicle's speed, either steers in the same or opposite direction as the front wheels to improve the vehicle's agility or stability.

Likewise, the T and GT3 share the same design cues -- a distinctive front fascia with large air intakes and that thin, air outlet slot at the leading edge of the front decklid, plus a slotted rear fascia set off by a rear underbody diffuser. Unlike the GT3, the T's front and rear turn signal lenses and rear tail lights are not tinted. The big and only real visual difference between the two GT3 variants is that the T is fitted with the 911 Carrera's pop-up rear spoiler (set off by a body-color rear lip or "Gurney Flap"), rather than the GT3's fixed rear wing. Other, less noticeable features include a specially designed rear grille with GT3 Touring logo, silver-finished Sport Exhaust tailpipes, side window surrounds and headlight washer covers. ​

As a gentleman's sports car, the 911 GT3 Touring features an interior that's light on Alcantara and heavy on leather. The steering wheel rim with its 12 o'clock marker, the shift lever, door panel armrests, interior door handles and center console storage compartment lid are leather covered, while the seats (no rears, fronts only, thank you) have black fabric center panels and headrests embossed with Porsche crests. Porsche Communication Management (PCM) including an online navigation module with real-time traffic information and the Connect Plus module with the Porsche Track Precision app that enables drivers to display, record and analyze detailed driving data on their smartphones, is standard, as it is on the normal GT3, but you'll need Porsche's optional ($550) Sports Chrono package in order to trigger the Track Precision app. Speaking of options, feel free to personalize your 911 GT3 Touring by adding, say, carbon composite disc brakes ($9,200), bucket seats ($5,200), and an extended-range, 23.7-gallon fuel tank ($140), as well as any other items from a dizzying array of extras that includes custom wheels, various  exterior and interior trim packages and the like. 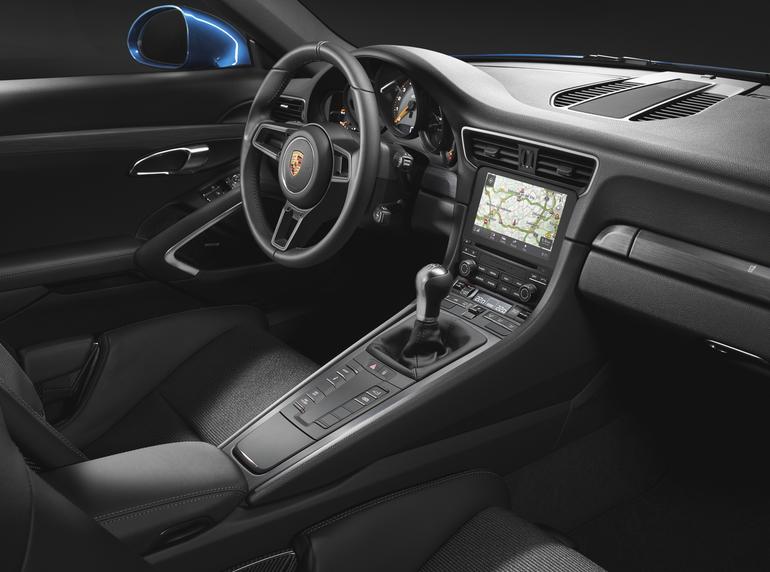 ​​​​​​​If I had a thousand dollars for every time I heard a Porsche purist complain about Zuffenhausen not offering a manual transmission in some of its hottest models, I could afford to buy the factory's latest 911 GT3 variant, which costs (spoiler alert) $143,600. A so-called niche model, it's essentially a GT3 sans PDK automatic transmission and a fixed rear wing. Porsche says it "harkens back to a variant of the 911 Carrera RS from 1973" and refers to the car as a 911 GT3 with Touring Package, a clumsy moniker, if there ever was one. Why not just call it a GT3 T, guys?

Speaking of "T," which stands for Touring, the appellation goes back further than 1973, as stated in Porsche's press release. Actually, the first T went into production in August 1967 and debuted as a 1968 model, where it was slotted between the 912 and the 911. Built to a price point, it was essentially a 912 fitted with a less powerful flat-6 that used less exotic materials than the normal 911 powerplant and developed 110 bhp DIN, 20 horsepower less than the normal 911 and 50 bhp less than the S. As a further concession to cost, the T was fitted with a 4-speed gearbox and solid brake discs and had no anti-roll bars. The interior was a bit Spartan, which made the T about 75 pounds lighter than the normal 911, and the perfect candidate for a racing car. No wonder that Vic Elford drove a 911T (albeit one powered by a 911S engine) when he won the 1968 Monte Carlo rally. Following the demise of the 912 at the end of the 1969 model year, the T became the entry level 911 until it, too, was discontinued at the end of the 1973 model year. 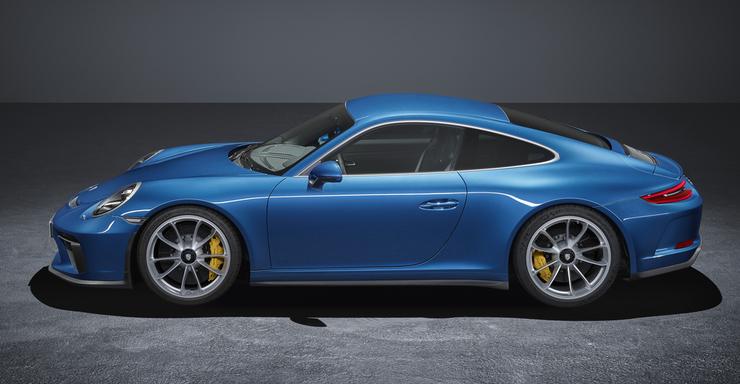 Unlike the original T, which was a stripped-down model, the just-introduced 911 GT3 with Touring Package (there, I said it) is anything but stripped. In fact, it retains the same, high-revving, 4.0-liter, 500-horsepower normally aspirated engine that's shared with the RSR and the GT3 Cup racers. But unlike the normal PDK-equipped GT3 road car, the new T sports a 6-speed manual transmission with gear ratios tailored to the power and torque of its direct injection flat-6 that revs to 9,000 rpm. An automatic rev-matching feature that's keyed by pushing the Sport button on the center console not only ensures faster gear synchronization, but also makes for great engine sounds on downshifts. A mechanical rear differential lock with brake-base torque vectoring (PTV) ensures that power flows effectively to both rear drive wheels. 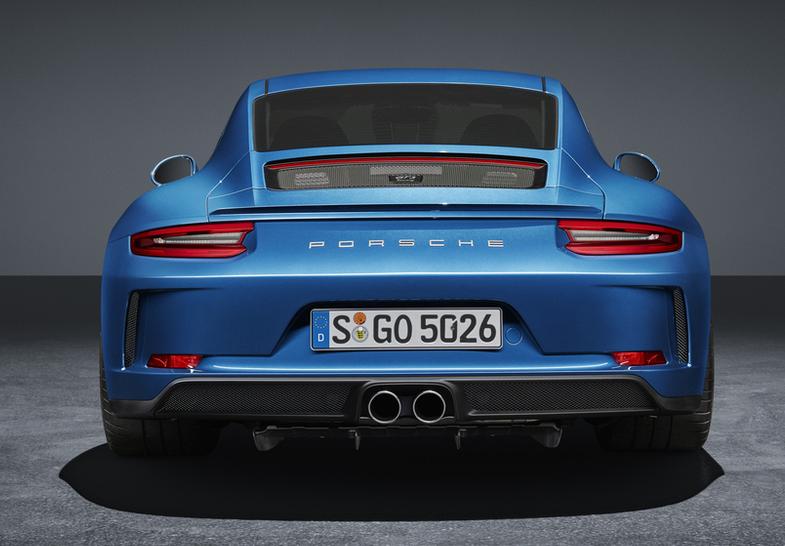