Anchored by a huge stage flanked by two jumbotron tv screens, Porsche Park was a place to enjoy interviews and music, nosh and relax. Oh, and shop at Porsche's goodie store where Rennsport VI baseball caps went for $40 and the conga line of customers seemed never ending throughout the four-day event. It seems that Porsche has figured out a way to 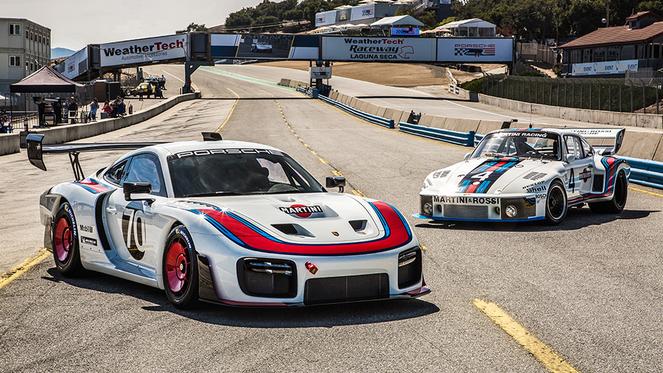 "Can you imagine the amount of money sitting here," asked Bill Warner, as he threaded his golf cart through the paddock at Porsche Rennsport Reunion VI. Warner, founder of the Amelia Island Concours d'Elegance and a Porsche owner, knows a few things about cars and their value. A few years ago, Bill, who has a car collection of his own and vintage races a couple of ex-group 44 Triumphs, once sold a one-of a-kind two-seat street roadster built for Edsel Ford for $1 million. "Will you miss that car," asked a friend after the auction? "Are you kidding," laughed Warner, "I just made a million bucks!" Warner, who along with Dr. Wolfgang Porsche, was serving as Rennsport's co-grand marshal, certainly knows how cars can become expensive commodities, but even he was staggered by the hundreds of millions of dollars represented at  this year's event.

Rennsport, which has been held every three or four years since 2001, is  arguably the biggest gathering of Porsche enthusiasts, owners and drivers ever assembled. It's a happening, a meet and greet, vintage race, concours and class reunion all rolled into one. At WeatherTech Raceway Laguna Seca in Monterey, California, the sixth iteration of the fabled event attracted a record crowd of 81,550 and an amazing number of Porsches of seemingly every configuration and type. The Porsche Corral where owners paid $175 to park their ride next to a similar model of the same type, ultimately drew 1,600 Porsches, but when I looked at one of the early lists of cars, I counted 954 including 23 GT3 RS models, 13 Type 918s, 18 GT2 RS and three 911Rs. And that's just talkin' recently built, high-dollar production cars, not vintage road cars like the 959 (at least a dozen by my count) or recently retired racers like a Porsche RS Spyder, one of 17 built, which sold at auction for $4.2 million. Speaking of racing cars, there were 17 of the legendary  935s and 16 956/962s among the 258 Porsches competing in one of Rennsport's seven race classes.

If one picture is worth a thousand words, then   this slide show is worth 120,000 words

In addition to a seemingly endless procession of vintage racing cars droning around 'Seca's 2.24-mile road course,  the Rennsport organizers lightened things up a bit by adding two races featuring 17 Porsche tractors. Pro factory driver Patrick Long won the first go round, which didn't exactly go around the entire circuit since your average 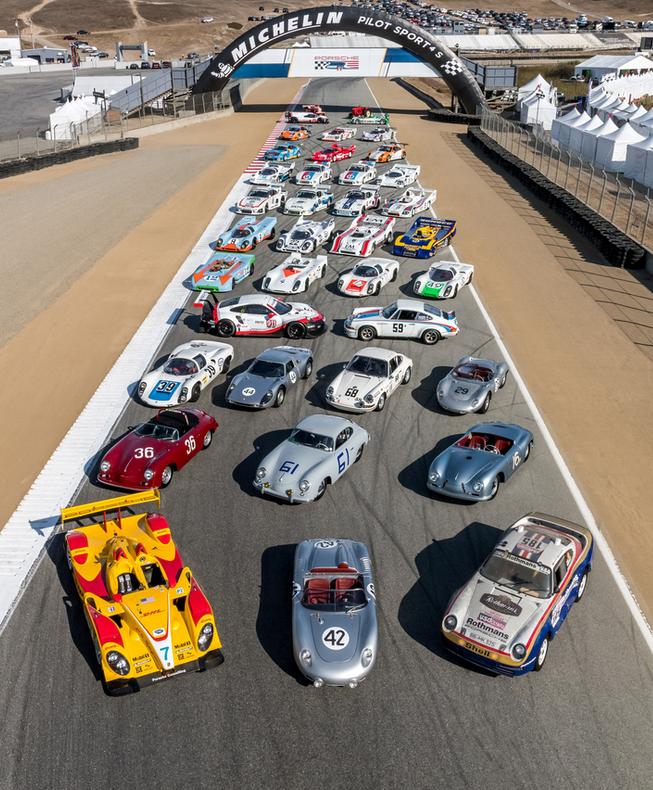 But the cars weren't the only stars at Rennsport, which pays homage to the drivers who raced Porsches and the designers and engineers who built them. Road racing champion of many series, Brian Redman was in the house, as was his Targa Florio-winning 908/3, owned by comedian and consummate Porsche collector Jerry Seinfeld. Addressing the crowd in Porsche Park, Redman spoke about how in 2001, Rennsport came about as the 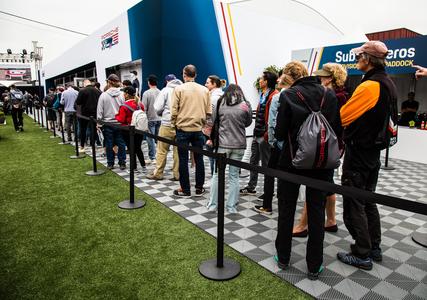 Although the new 935 is built around the 911 GT2 RS road car, it's not street legal and has no VIN number. Heck, it's not even race legal because it's not homologated for pro racing. Instead, Porsche calls it a Clubsport and says it's to be raced at say, Porsche Club of America track events and in private training on racetracks. Or you could just bring it to the next Rennsport Reunion, which I'm betting will be held at Laguna Seca. You heard it here first.

Alas (don't you just hate that word?), Porsche will build only 77 of these beauties at about $811,000 a pop if you convert Euros to dollars. However, a PCNA spokesman says North American prices will be "market driven," so maybe if the Dow tanks they'll be cheaper. As for why only 77 cars and not, say, 78? PCNA says that's because the 935 was introduced in the 1977 season, although the original, factory-raced Martini 935 was introduced in '76. It's successor, the 935/77 was introduced the following year and most closely resembles the new 935, which also incorporates a few elements like that big rear spoiler from the 935/78 aka Moby Dick. Anyway, deliveries begin in June of 2019 "at exclusive delivery events," says Porsche. Wonder if there'll be lunch?

monetize just about everything, although to be fair, the company gave as good as it got, gifting lucky Rennsport attendees with prizes such as an xBox console as well as t-shirts, hats and other gee-gaws.

tractor, even a Porsche, travels at glacial speeds. Instead the races began at the start-finish line with a Le Mans start and ended at turn 5. Agricultural driving techniques were employed by a few drivers (these are tractors, after all) and some drivers like Cooper MacNeil, son of Mr. WeatherTech, David MacNeil, even tried taking his machine out of gear and coasting down the hill toward T5. "It didn't change anything," said the 26-year-old IMSA professional.

From tractors to turbos, Rennsport VI had something for everyone. On one of the displays, it said that 70 percent of the all of the cars ever built by Porsche are still on the road. There was ample evidence of that at Laguna Seca with the hundreds of privately owned and carefully restored Porsches of every type. "But you're only as good as your last success," goes the adage and Porsche gets that. Over the years, the crowd count has grown from 15,000 at Rennsport Reunion I to 60,000 at Rennsport V before reaching this year's staggering 81,550. Will Rennsport Reunion VII, which should take place in 2021, be even bigger? Stick around and see. 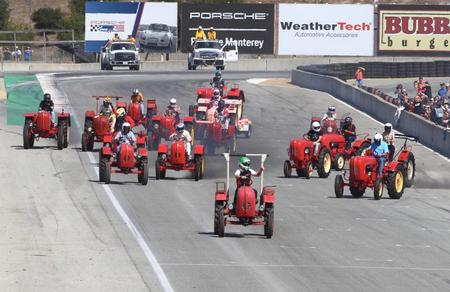 Featured cars? Those would be the dozen landmark Porsches displayed in the garages along the pit straight, or the 55 iconic racers showcased in the big tent known as the Chopard Heritage Display. From the first Porsche to some of the latest racing variants, practically every racer ever produced was on display, grouped together, timeline fashion, with other cars of the same type and era. Strategically placed placards suspended overhead explained the respective types' history. 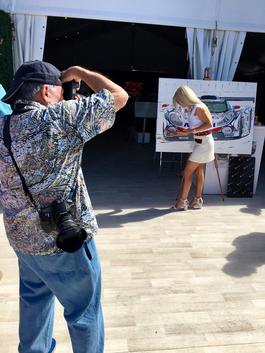 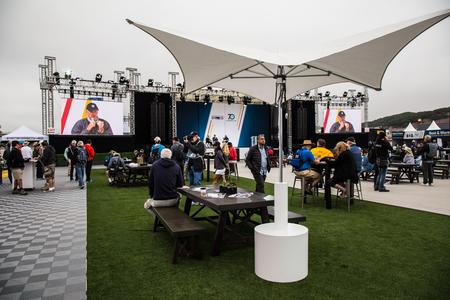 When you boys are through playin', there's plowin' to do.

result of his relationship with Porsche Cars of North America's PR boss, the late Bob Carlson. Meanwhile, other Daytona, Le Mans and Sebring winners young and old regaled fans with their stories of epic battles back in the day and in the present. Engineers? None better and more revered than Norbert Singer who was responsible for 16 out of 17 Porsche wins at Le Mans.

Earlier this year, it was rumored that Porsche would unveil a new model at Rennsport -- the Taycan perhaps, or maybe the new 911. Disappointingly, the big reveal, or reveals because there were two cars unveiled, turned out to be the 991-based Speedster concept car, built to commemorate Porsche's 70th anniversary, and a 911 GT2 RS-based track car called the 935 that mimics the series-dominating racers of 1977-78. The folks in Zuffenhausen say that the neo 935 "pays tribute to the 935/78 Le Mans race car, which fans dubbed Moby Dick." But while the shape of much of the new racer's bodywork is reminiscent of Moby Dick's, the quasi 935 doesn't have the 78's elongated tail, although it does sport a similar (and humongous!) strut-mounted rear wing. My read? The new 935 is a hybrid that incorporates design elements of the 935/77 and the /78 as well as other Porsches such as the 917, 909 Bergspyder and Carrera GT. The carbon fiber steering wheel and the color display behind it  "have been taken from the 2019 Porsche 911 GT3 R racing car," says the company's press release. Hmm, I hope they replace it before the buyer of a new GT3 R realizes that it's gone missing.