A new racing bucket seat and air conditioning are among the R's interior niceties. 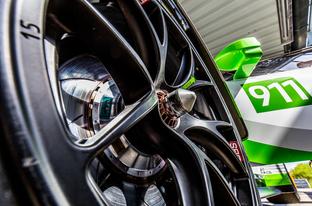 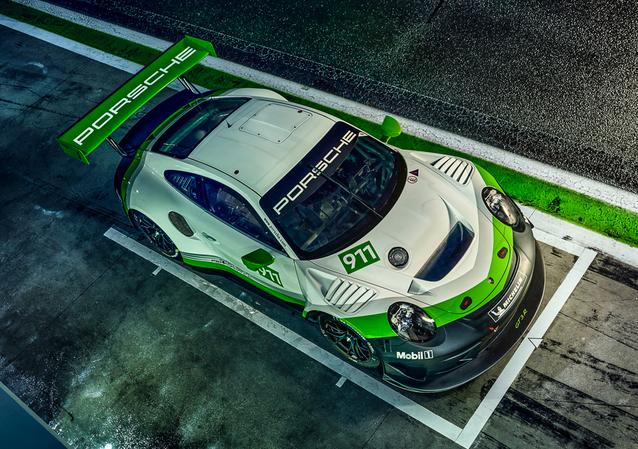 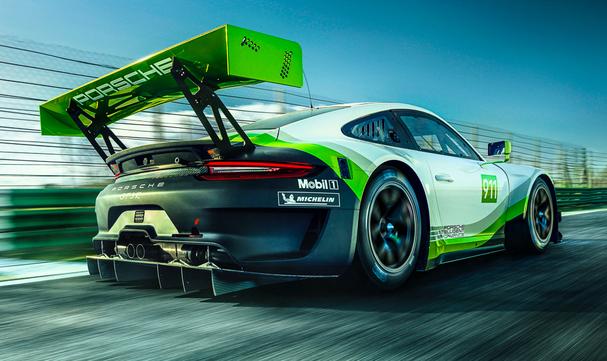 Certainly worth a mention is the new R's 31.7 gallon (120-liter) fuel cell which can be configured for right- or left-side refueling depending on a track's pit location. Very handy, given that I've seen fuelers leap onto the front decklid to access the fuel filler.

​          As equipped, the 2019 GT3 R is essentially ready to race. But there are always options. Kudos to Porsche for using the word "optional" and not the industry's weasel-worded term "available," which to me has always meant it's included at no extra cost. Anyway, a few extra bucks will get you telemetry, an endurance-racing kit, heated windshield and such. Of course, North American racing teams will need the so-called "IMSA KIt," which includes windshield and rear window braces.

stiffness and to provide more precise control of the ABS. New BBS center-lock wheels now measure 12.5 x 18.0 inches up front (a half inch wider than before), unlike the 13.0 x 18.0-in. rears that are the same size as the current rims, while the front tires are upsized from 300/650-18 to 300/680-18. Not so the 310/710-18 rears, which are the same size as the current tires. Porsche doesn't mention tire sizes and says only that the front tire circumference has been increased from 25.6 to 26.77 inches (Note to self: bring tape measure to next IMSA race). Incidentally, the new R's wheel and tire dimensions seem very close to the RSR's, making me to once again wonder how much of the GTLM racer is in the new GT3 R.

Emphasis on driver safety has always been paramount at Porsche and nowhere is this more evident than in the cockpit of the new GT3 R. A new racing bucket seat bolted in at six points offers greater protection than before, and the driver's center of gravity has been optimized. To protect against side impact intrusion (translated: getting T-boned in a collision), a carbon-fiber/Kevlar/aluminum pod filled with energy absorbing foam is positioned in the driver's door. And for the first time, the GT3 R is equipped with air conditioning with a direct connection to the seat and the driver's helmet. And to think that many Porsche road car buyers once sought to reduce weight by deleting A/C.

The new R's driver's door is fitted with an energy-absorbing side-impact element. 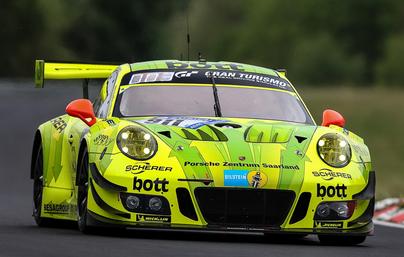 ​Despite its RS road car heritage, the new R racer looks very much like an RSR.

"Cool," you say. "But what about the engine?" Glad you asked. It's fundamentally the same, normally aspirated, direct injection, 4.0-liter flat-6 that powers every 911 GT3-based variant including the RS road car and the current R racing car. Tweaked just a bit, the 2019 R powerplant offers better driveablity and has a broader useable rev range, says Porsche. Oh, and it develops 550 bhp, more than the rest of the GT3 family including the 520 horsepower RSR. Not that it matters because as Porsche is quick to remind us, a racing car's horsepower output is subject to the FIA's and everybody else's Balance of Performance formula, which regulates power and adjusts weight to ensure a level playing field.

​             In order to deliver all that power to the rear wheels, the new GT3 R and all of Porsche's GT-based racing cars use a sequential six-speed, constant-mesh gearbox with an electro-hydraulic shift mechanism that's actuated by a paddle shifter with electronic shift drum actuator (easy for you to say). Not that you would ever think so, but this racing transmission is essentially a manual gearbox  and not a PDK. There's a racing clutch, but it's used only to engage/disengage the drivetrain while stopping or starting and not for changing gears. Got it? Downstream from the gearbox (but not very far), a mechanical limited-slip differential with external pre-load adjustment ensures optimum distribution of power to both wheels. 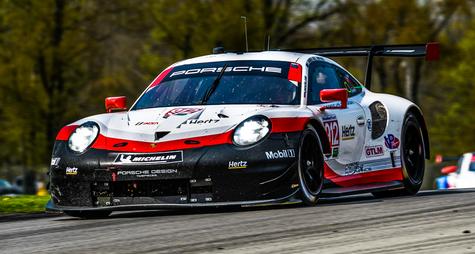 All-factory, all-the-time, Porsche's current mid-engine 911 RSR recently notched its second IMSA/WeatherTech victory of the season at Mid-Ohio.  Note the RSR's side-mounted mirrors, which appear to have been adapted to the 2019 GT3 R. 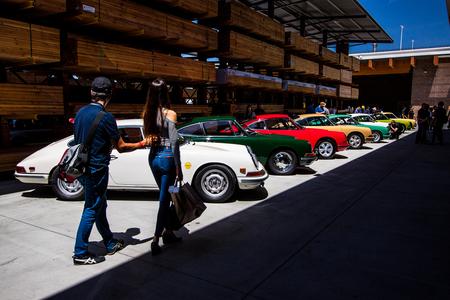 Like the current R and the RS road car, the air vents atop the front fenders of the new R increase front downforce and reduce air turbulence around the front wheels. But as far as rear downforce -- and appearance -- go, the proverbial elephant in the room is that humongous 74.8 x 15.8-inch carbon-fiber rear wing that seriously plants the new car's tail. Lending an assist is an aggressive-looking underbody diffuser that practically screams "RSR." 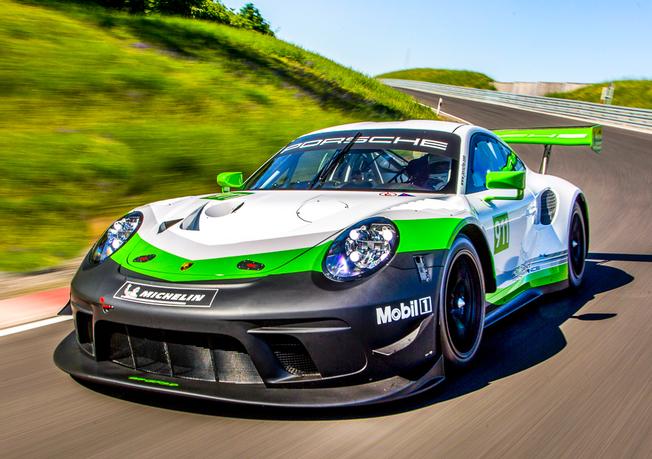 Now back to our story and those all important details that make the new 911 GT3 R "strong, swift, spectacular," to quote Porsche. In addition to the aforementioned body shell, which features "intelligent aluminum-steel composite construction," the 2019 racer's roof, front decklid and fairing, wheel arches, doors, side and tail sections, not to mention the rear deck lid and interior trim are constructed of especially light carbon fiber. Porsche uses the industry term CFRP (carbon-fiber reinforced polymer), an abbreviation that trips off the tongue. In fact, I can just picture the boys at the works in Weissach-Flacht gathering after hours at the local biergarten to sing drinking songs celebrating the merits of CFRP, which I'm guessing are strength and lightness. Anyway, in addition to all of those carbon-fiber body parts, which are easily detachable/replaceable, all of the R's windows (front, rear, side) are polycarbonate and in the case of the door "glass," are also easily replaceable in case you "accidentally" break one.

Just when you think Porsche has played every hand in the 911 GT3 game, along comes the 911 GT3 R, its 2019 custormer racer that's based on the recently introduced 911 GT3 RS road car. Admittedly, there are elements of the RS production car evident in the new racing car -- aluminum-steel composite construction, which provides the basic platform for the GT3 R, plus a high-revving 4.0-liter normally aspirated flat-6 that's shared by the entire GT3 product line. But to me, certain visual and mechanical cues suggest that as well as the RS, the new R racing car has been influenced by the RSR, Porsche's factory racer that competes in the GTLM (GT Le Mans) category. Air inlets atop the rear fenders, as per the RS road car, are new and currently appear only on the RSR. Side-mounted mirrors on ultra-thin struts seem to be RSR derived, as is the engine's new induction system, which features six electronically operated individual throttle butterflies, just like the air-cooled RSR engines of the mid-1970s. Details about the new racer follow, but first, for comparison purposes, check out these photos of the current 911 GT3 R and the factory RSR . 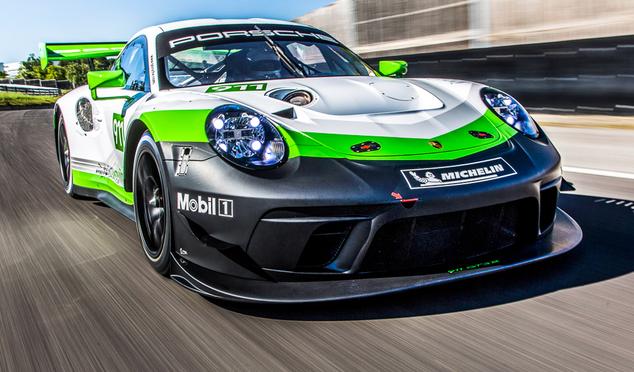 Porsche's current 911 GT3 R customer racer is a carryover from the 2017 model except for the new front decklid with improved aerodynamics and cooling and the front surround with side airfoils.  Shown here is the factory-entered R, winner of the recent 24 Hours of Nurburgring enduro. 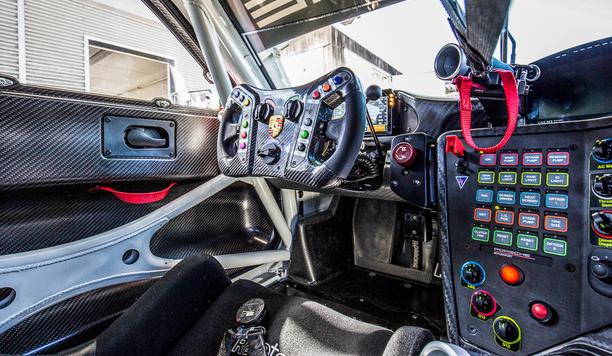 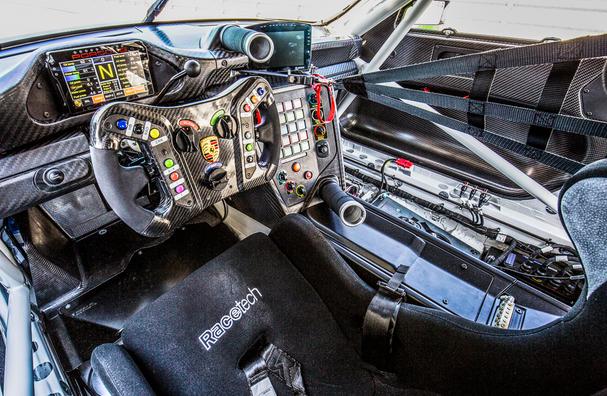 Fundamentally unchanged from 2018, the new 911 GT3 R's  suspension uses upper and lower A-arms up front and multi-links at the rear, and while the cars brakes are dimensionally unchanged, the brake system has been modified to increase