​Typical of all 911s, the Porsche Communications Management system (PCM) serves as Mission Control for the audio, communication and navigation systems. When linked with the optional Chrono Package, the PCM can display, save and evaluate track times or to see how long it took you to get to the bank to cover the check you just wrote for $300,000, give or take.

​               Just like the buyers of the recently introduced Porsche 911 Turbo S Exclusive Series, featured elsewhere on this site, GT2 RS customers can treat themselves to a special Porsche Design chronograph with a housing made of lightweight titanium. Priced at about $11 grand, the watch is presented when you pick up the keys to your car at your local Porsche Center. Unlike the 911 Turbo S Exclusive Series coupe, whose production will be limited to 500 units, Porsche says that production limits have not been set for the GT2 RS.  Whew, what a relief! "Alexa, call Wells Fargo."

No need to speculate any more. The 911 GT2 RS, Porsche's most powerful and fastest street-legal production car, finally broke cover, officially this time, at the Goodwood Festival of Speed, an incredible show-and-tell where vintage and contemporary racing cars, often piloted by the sport's legends, are driven at speed up the driveway on the sprawling estate of the Earl of March. An annual happening, Goodwood is the perfect place to display a car as dynamic as the GT2 RS and beats a car show like Frankfurt any day. Brilliant idea, Porsche. 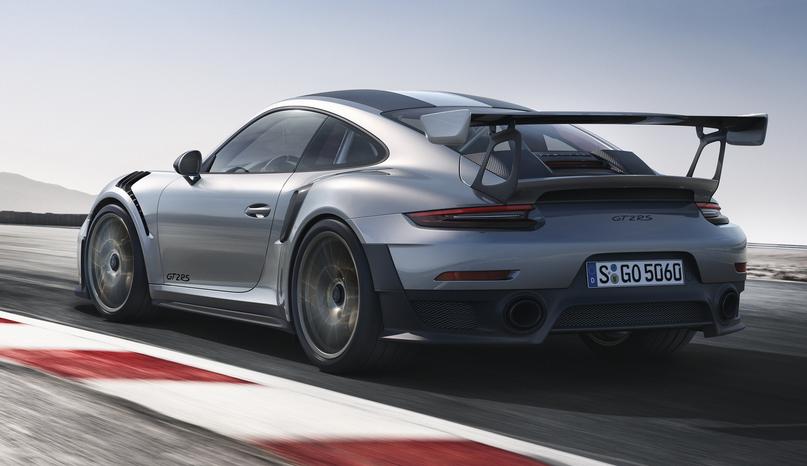 Crazy fast is one thing. But scary fast?  Not so much, which is why the 211 mph GT2 RS sports a race-car inspired chassis with rear-axle steering and a specially calibrated Porsche Stability Management system (PSM) with a Sport mode tailored for optimal driving dynamics. Porsche Composite Ceramic Disc Brakes (PCCB)  are standard, and the GT2 rides on wide wheels shod with ultra-high-performance 265/35 ZR 20 front and 325/30 ZR 21 rear tires. Aggressively shaped air intakes and outlets topped off by a massive rear wing are a key part of the car's aerodynamics. Carbon fiber abounds, and the front decklid, front fenders, front wheel-well vents, exterior mirror shells, side air intakes and parts of the rear surround are made of the material. The roof of the standard-issue GT2 RS is magnesium and like the carbon fiber components, helps the coupe achieve s its target weight of 3,241 pounds, 300 pounds less than the Turbo S.

Butt weight! There's less. Porsche's optional Weissach package amps up the GT2's performance, paring off almost 40 pounds by utilizing additional carbon fiber and titanium components.  For example, the roof, anti-roll bars and the end links on both axles are carbon fiber, while forged magnesium wheels knock another 25 pounds off the car's overall weight and also reduce unsprung weight. And to make the GT2 RS lightweight look even more distinctive (as if it needs to), the front decklid and the carbon-weave finish roof are set off by a body-color central stripe. 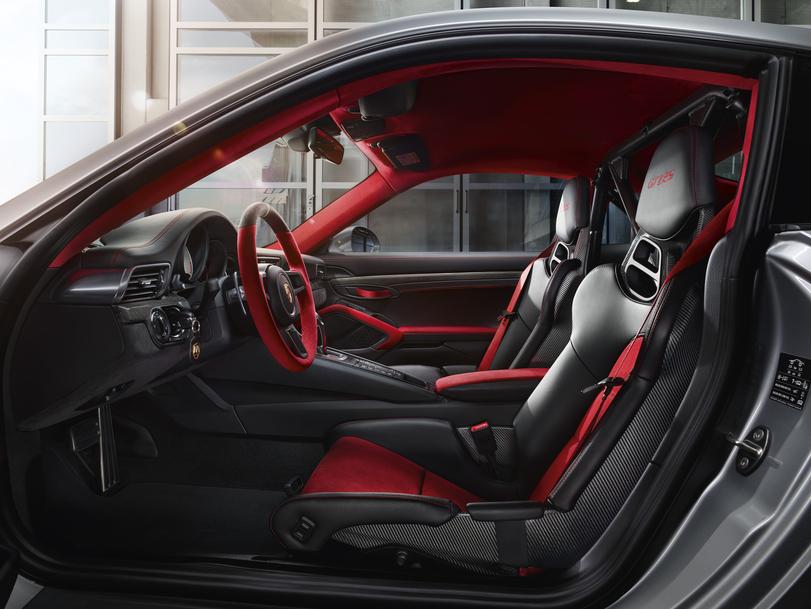 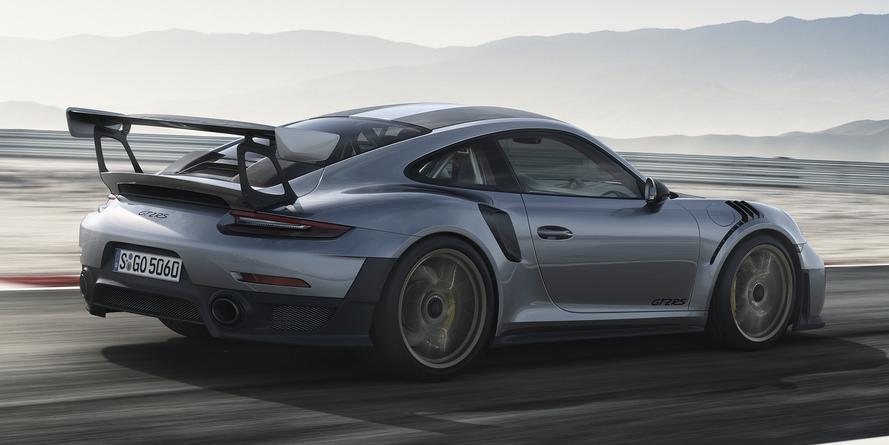 Can't get enough of that carbon weave look? Then take a gander at the GT2's interior, whose red Alcantara upholstery is accented by black leather and by (wait for it) carbon-weave trim, which sets off the competition-style bucket seats. The red Alcantara-trimmed steering wheel features racing-style shifter paddles, just like the big boys use. And like the cars the racers use, the Euro-spec GT2 RS is fitted with a sturdy roll bar with down tubes for added chassis stiffness. It's a pity that the rollbar isn't available in North America, because this is, after all, one serious road car.

As rumored, the 2018 911 GT2 RS, which is powered by a super-tuned version of Porsche's 3.8-liter Turbo powerplant, develops 700 horsepower and 553-pound feet of torque, thanks in part to larger turbochargers that jam an increased volume of air into the combustion chambers. At peak loads and at very high temperatures, a new additional cooling system sprays water into the intercooler, reducing gas temperature at high boost, and ensuring optimum power output under extreme conditions. Downstream, an ultra-light titanium exhaust system weighing about 15 pounds less than the 911 Turbo's, delivers an unprecedented and awesome sound. Porsche's specially tuned, 7-speed PDK, double-clutch transmission (none dare call it an automatic) delivers power to the GT2 RS's rear wheels. Unlike the Turbo, the GT2 does not have all-wheel-drive and takes a whole 2.7 seconds to go from 0 to 60 mph. Does it matter? Well, on the one hand, awd offers better traction since power is distributed to all four wheels, so maybe a GT2 with awd could be quicker. But on the other hand, even the best awd systems are heavier than rear-drive only and the GT2 RS is a car that's been put on a strict diet. Plus nothing has the lively race-car feel of an rwd automobile with power up the gazoo, and that's what the GT2 is all about. 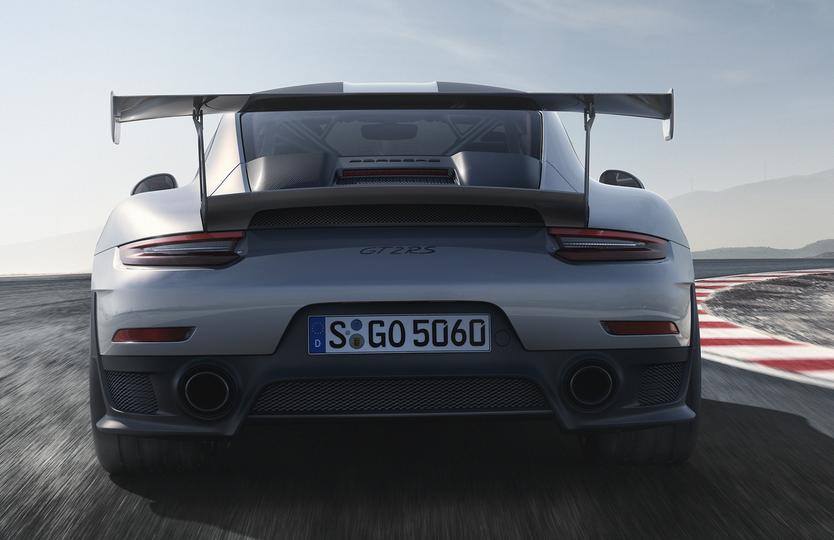 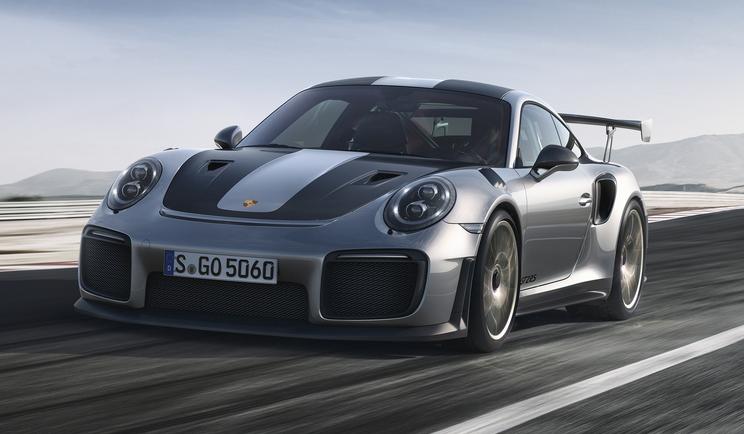 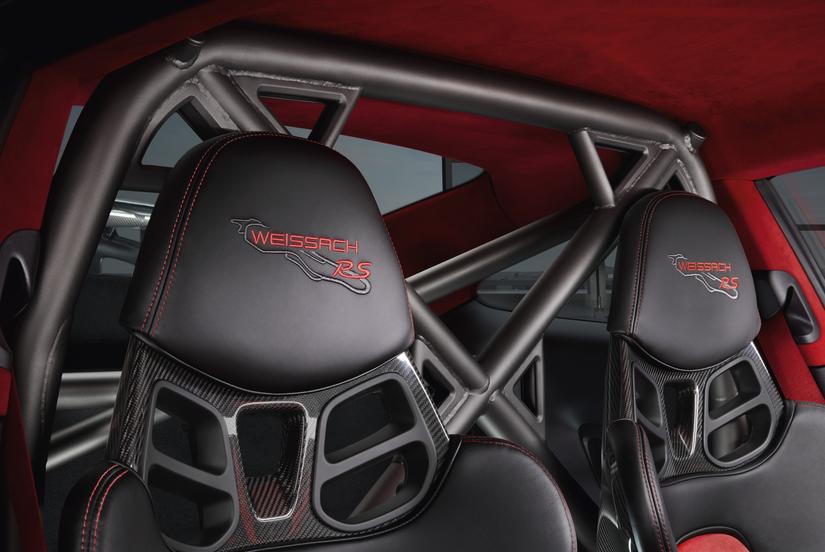