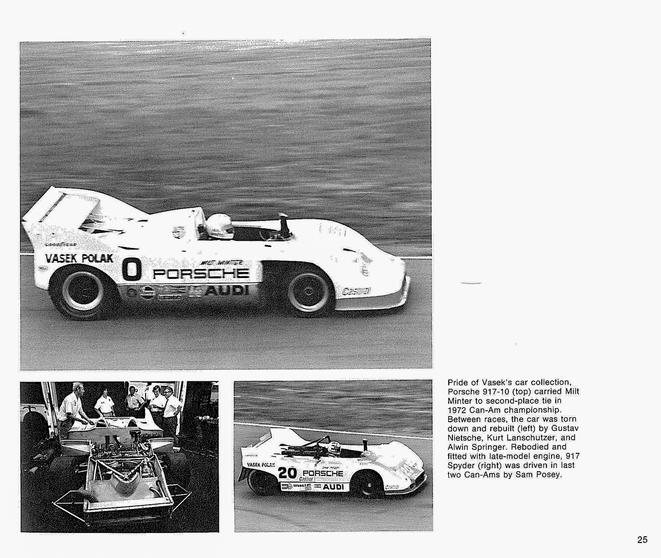 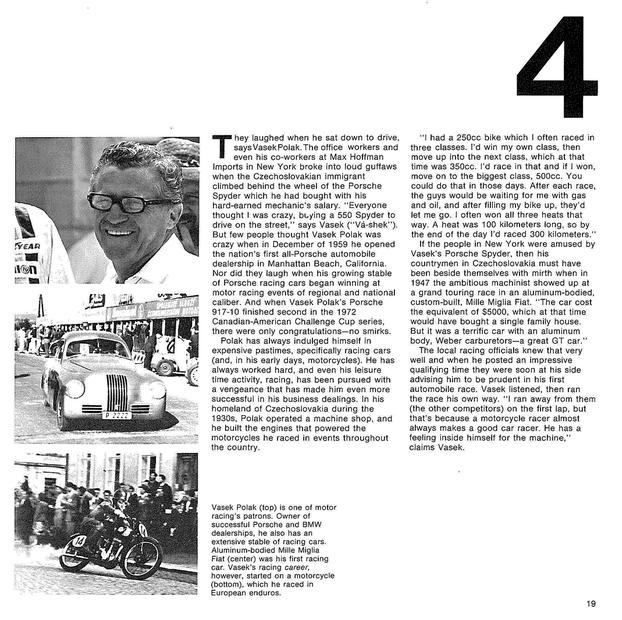 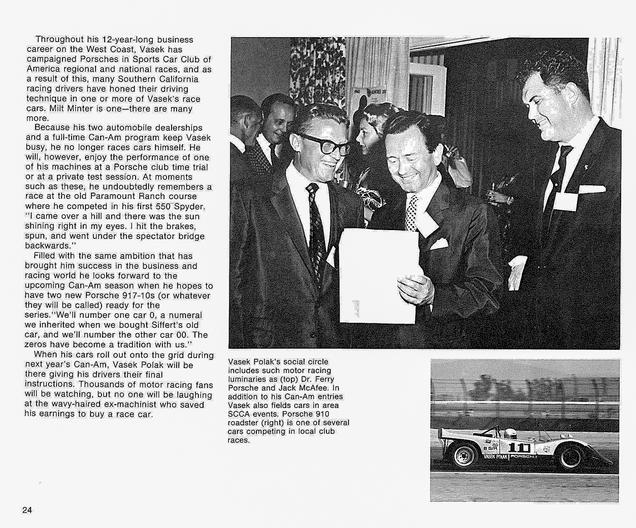 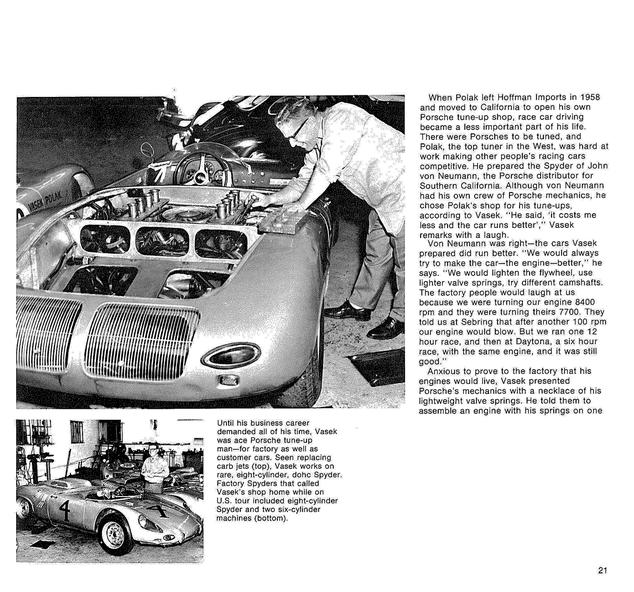 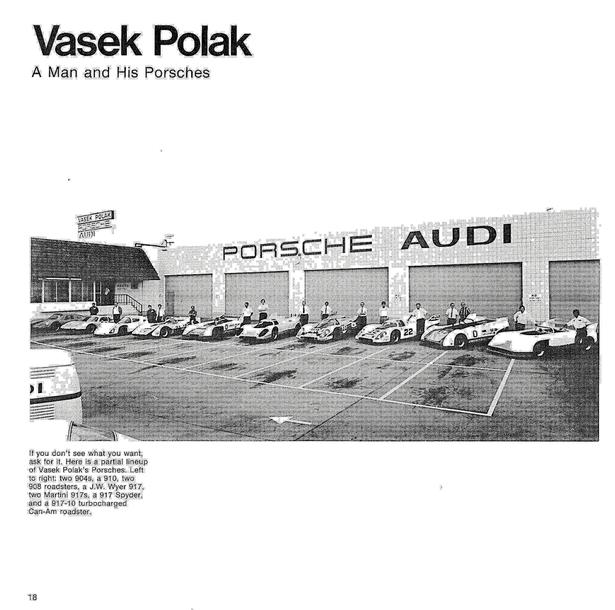 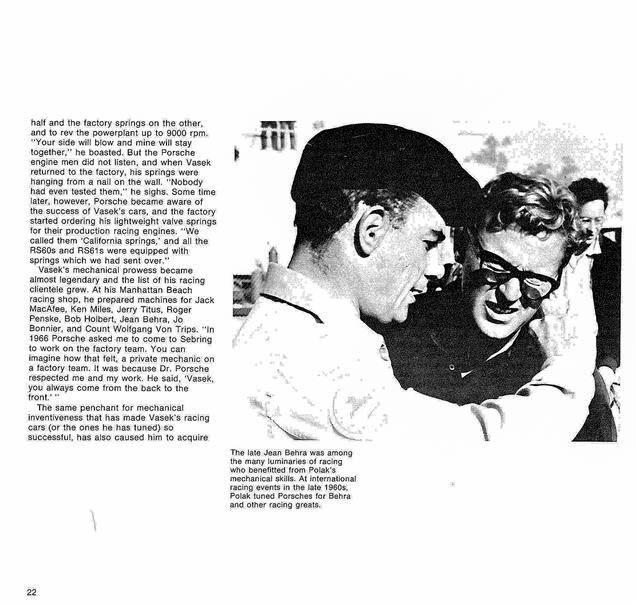 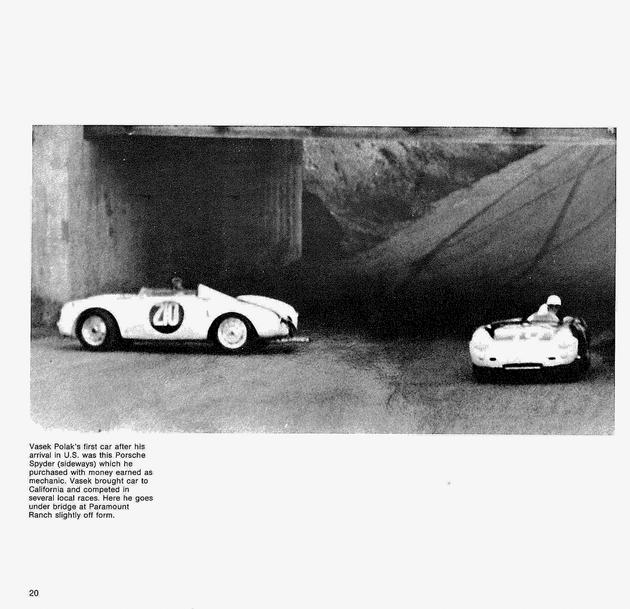 Vasek Polak: A man and his Porsches 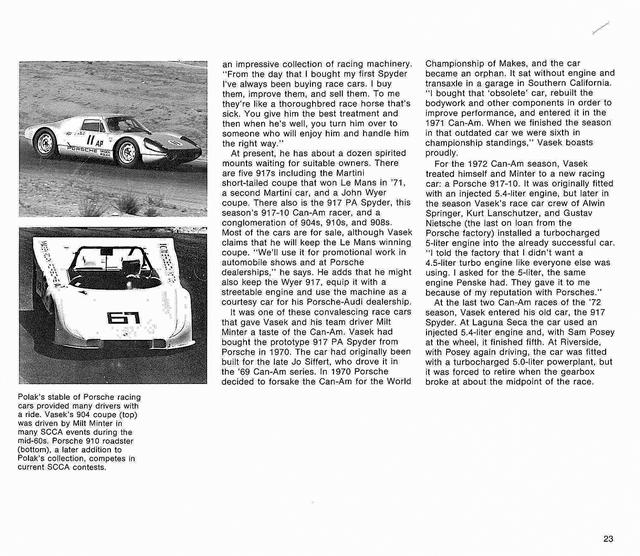 Fresh out of Bondurant's, I was looking for a ride. Something simple, like a track-ready showroom stock racer to drive in an SCCA qualifying session that would enable me to earn my competition license. I mentioned my plight to Vasek Polak. "Come over to my Saab store and talk to Alan (let's call him)." And so I did. Before long, I was wheeling down the 405 heading for home and musing over the instructions I had been given: "Shift when the clock's big hand is at 3." What?

​           If you've been around SCCA amateur road racing for a while, you may recall that in it's infancy, showroom stock was so pure that not even an after-market tachometer was allowed in a car that wasn't factory equipped with one. Shifting without a tach is doable, but not recommended, especially in the heat of racing, so Polak's race shop had built a tach into the clock. Worked like a charm and I went on to get my license.

Although much of Vasek's life story is laid out in the chapter reprinted below, much of what appeared then happened years later. For example, Polak's business empire continued to grow and so did his car collection. Call him a scavenger or a picker or whatever, but by the mid nineties, he had accumulated enough Porsches and related parts to fill an entire warehouse, where many of them were stacked three high in rows lining the walls. At one time, following the demise of the Can-Am, Polak owned five 917-10s, including the Brumos number 59, which Peter Gregg and later, Hurley Haywood drove in the series. Rumor has it that Vasek, who bought the car from Gregg on the cheap, sold it back to Brumos for substantially more money, some years after Peter's death when the Florida dealership sought to add to it's racing car collection.

​             How Polak accumulated all those cars and parts, many of which came directly from Porsche, is subject to conjecture. Some have said he had a close relationship with the Porsche family, that went back to the founding of the company, and that he had dibs on whatever the factory chose to rid itself of. Perhaps. Others suggested that he was merely a savvy businessman who knew a good deal when he saw one (one man's trash is another man's treasure). Anyway, be it a 959 test mule or a spare 1978 Indy Car chassis, if Porsche built it, chances are Vasek had it.

​              Unfortunately, Vasek Polak's life came to an untimely end. One rainy night in April 1997, Polak, who had just taken delivery of a new 911 Turbo S, was motoring down an autobahn at more than 110 mph, when he lost control and hit a bridge abutment. Seriously injured, he lie in German hospital as doctors waited for his condition to stabilize. Heartened by the news of his improvment, certain family members insisted that he be flown back to Torrance Memorial Hospital in southern California where they felt he would receive better medical treatment. Mid-way through the flight, as the chartered Lear jet, equipped with an intensive car unit, stopped to refuel in Great Falls, Montana, Polak died of a massive heart attack.