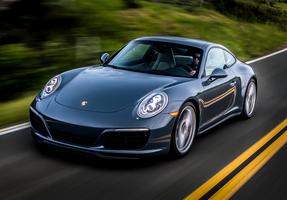 Think of it as a celebration of things fast, a tip of the hat to an iconic sports car whose shape -- and color-- became the stuff of automotive legend. That car was the 1987 RUF CTR, dubbed Yellow Bird by Ruf's crew because it stood out from the drab surroundings when it showed up at Ehra-Lessien, Volkswagen's high-speed test track in Germany on a gloomy day in spring of '87. A contestant in Road & Track magazine's "World's Fastest Cars" shootout, the CTR blew away some very formidable competition with its 211 mph top speed posting, which left no doubt that Alois Ruf's tiny Bavarian car company was a serious player in the world of high-performance automobiles.

More than just a blast from the past 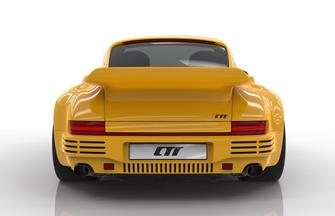 has fitted the 2017 CTR with a 3.6-liter, liquid-cooled, twin-turbo flat-6 that develops 710 horsepower while delivering 649 pound-feet of torque. The dry-sump-equipped, 24-valve dohc powerplant with variable valve timing, features twin intercoolers mounted aft, astride the engine (hence, the NACA ducts located atop the rear fenders). A 6-speed manual transmission specially developed by Ruf for the new CTR, sends power to the limited slip differential, which has its work cut out for it, so to speak. After all, this is a rear-wheel-drive car. By the way, like the '87 CTR, the latest Ruf features a fixed, "whale-tail" rear spoiler. 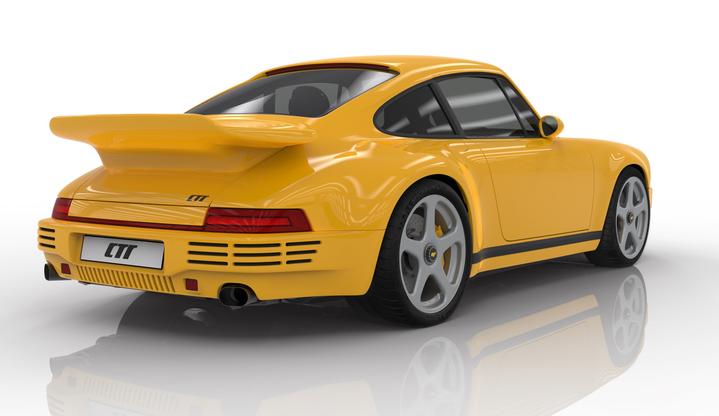 great. But while they share the same silhouette, the new models don't sport the classic sculpted lines of their predecessors, in this case, the early Carreras, whose sturdy shape feeds some folks' nostalgia for the past -- and the fast-- that's sweeping the sports car world. Few people know this better than Ruf, who's decided to pay tribute to the 1987 CTR by building the world's first, rear-engine, carbon fiber monocoque road car. "The concept for the 2017 CTR is one that I've had in my head for a very long time," said Ruf. "We've been waiting for the right point in our history to build our own car and the 30th anniversary of the CTR Yellow Bird is that moment." 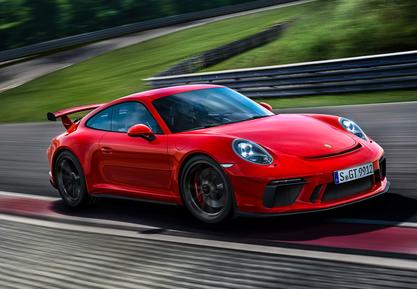 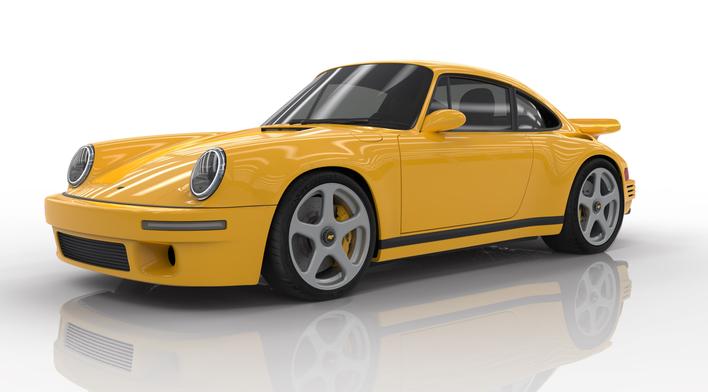 Like the 1987 CTR, the latest iteration has a relatively narrow body that at 71.6 inches is just slightly wider than the current Porsche 911 but not as wide as a Turbo. The CTR is shorter than a modern-day Porsche, but length doesn't figure into the equation because with the advent of the Type 991, the 911 has grown a bit since 1987. Of course, when it comes to weight, the new CTR, which tips the scales at 2,646  pounds (exactly the same weight as a Gen 2 Cup Car), is more than 500 pounds lighter than any 2018 Porsche road car, in large part because the Ruf's monocoque chassis and its body are carbon fiber. High-strength steel front and rear space frames tied into an integrated rollcage, serve as mounting points for the double-wishbone, front and rear suspension with pushrod-actuated , horizontally mounted shock absorbers. Five-spoke, center-lock, forged-alloy wheels measuring 8.5 x 19 in. at the front and 11.0 x 19 in. at the rear, are shod respectively with 245/35 ZR19 and 305/30 ZR19 tires. Six-piston, fixed caliper brakes with 380 mm ceramic rotors are paired with similar, four-piston rear brakes with 350-mm discs. ABS and traction control help keep everything tidy.

Despite the CTR's light weight, the Ruf's interior is not exactly Spartan. Upholstered in Alcantara, leather and other lightweight fabrics, it features foldable, carbon-fiber seats with integrated headrests. An aluminum pedal set and a Ruf three-spoke steering wheel are framed by a five-dial instrument panel whose analog gauges are punctuated by a 230 mph speedometer, which begs that all important question: How fast will she go?

​        Glad you asked. According to the folks in Pfaffenhasen where Rufs are built, the 2017 CTR, which goes from 0 to 62 mph in just under 3.5 seconds, tops out at 225 mph. That's impressive for a retro GT that looks like, but isn't exactly, a vintage Porsche, which it is definitely not. In fact both Porsche and Ruf are very sensitive about branding (can you spell lawsuit?), and in the eyes of the German government, which certifies such things, each is a unique marque. But back to performance. Although the new CTR's top speed is breathtaking, big numbers aren't the real issue. "We began developing the new CTR five years ago with the goal of creating a thrilling, analog driving experience that combines an amazing power-to-weight ratio, manual transmission and modern racing technology," said Estonia Ruf, the woman behind the man.

One thing is certain. You're not likely to see yourself coming and going in the 2017 Ruf CTR. Not just because production, which begins by 2018, will be limited to 30 cars, but because the new CTR is priced at approximately $811,000, depending on the Euro/Dollar exchange rate.

Thirty years have elapsed since Yellow Bird first flew and during that time production-based sports and GT cars have gotten faster. But they don't seem poised to become icons like the original CTR, which was based on the Porsche 911 Carrera of that era. Sure, the latest designs, which are ever changing, look

"Fantastisch," as they say in Germany. But if the new CTR is meant to pay homage to the original Yellow Bird, shouldn't it also go fast? "Jawohl," or words to that effect. Not one to disappoint, Alois, or Louis, as he's known to us Americans, 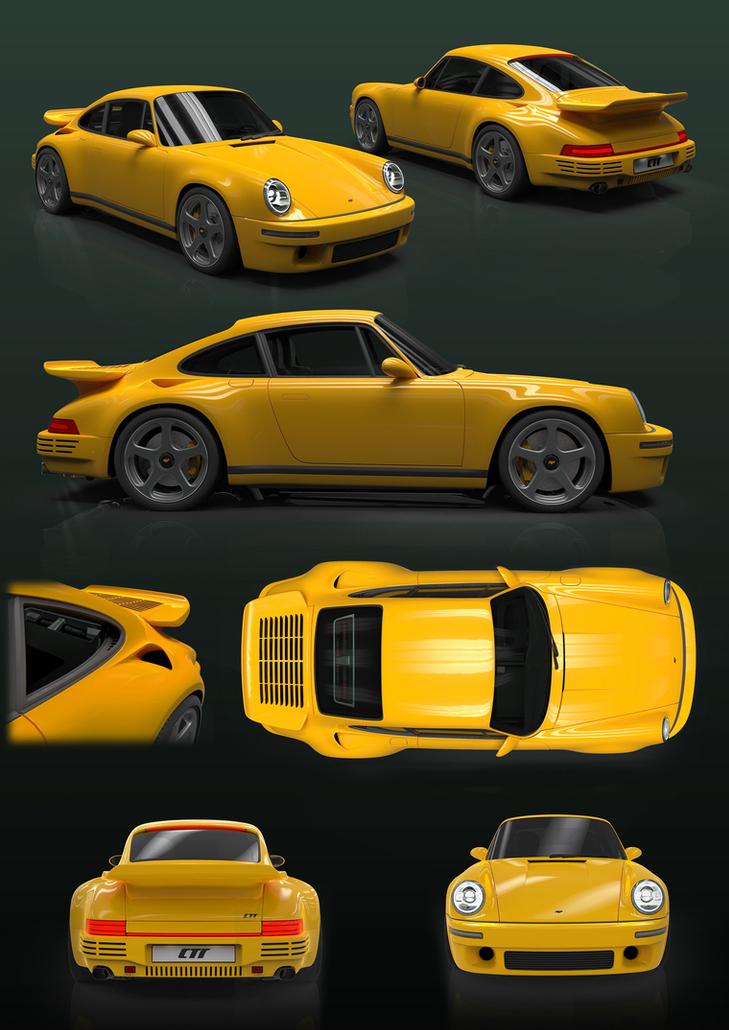 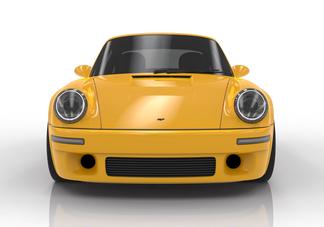