Since the GT3 is a road car and not a racer, the usual creature comforts abound. Among the list of standard equipment niceties: Porsche Communication Management (PCM), which includes a navigation system that also provides real-time traffic information, and the Connect Plus module and Track Precision app that allow drivers to display, record and analyze detailed driving data on their smartphone where it can be accessed by Russian hackers.

​             Porsche says that the 2018 GT3, which costs $143,600 plus $1,050 for shipping and handling, is expected to reach dealers in fall of 2017. Nothing has been said about availability, but if it's like any super-desirable model such as the 911R, Cayman GT Clubsport, etc, it'll sell like sunblock at a nudists' convention, so make that down payment now before Janet Yellen further jacks up those interest rates.

"I'd rather be right than be president." Oh, oh! Better not go there right now (sorry, Henry Clay). Instead let me just say that it feels great when your predictions about new cars turn out to be correct. Like when I opined that Porsche would unveil the new 911 GT3 at the Geneva Auto Show, which they did, so score one for me. Of course, they also revealed (gawd, how I hate that word) the Panamera Sport Turismo (that's Italiano for "hatchback"), which I said they might because, as I wrote earlier, the car had been seen roaming the roads of Europe. But the Zuffenhausers kind of surprised me by showing it at Geneva rather than Frankfurt, so how's about I take half-credit for that one, OK? Anyway, you can't say I didn't alert you about those new models. Now back to the business at hand, the new GT3 and Panamera.

​              First, the GT3, because let's face it, Porsche didn't become an iconic sports car maker building sedans, as good as they may be. At the risk of sounding like a Porsche homer (if the shoe fits), I think this baby looks sensational. And, according to what the factory tells us, it is. Based on the Gen 2 Type 991 platform, the new GT3 was developed in Weissach/Flacht, and will be built on the same production line as all other 911 road cars and GT3 Cup racers. The lightweight front fascia and front spoiler (carbon fiber, I'm guessing) may impart a menacing look, but the truth is their shape is dictated by aerodynamics and good airflow (for cooling). Aero's also the word at the back of the car where a lightweight, rigidly mounted, carbon-fiber rear wing, aided by a new underbody diffuser, keeps the tail, with its distinctive exhaust air openings, firmly planted in place, especially at the speeds the GT3 is capable of attaining -- a tick under 200 mph, but more about that later. 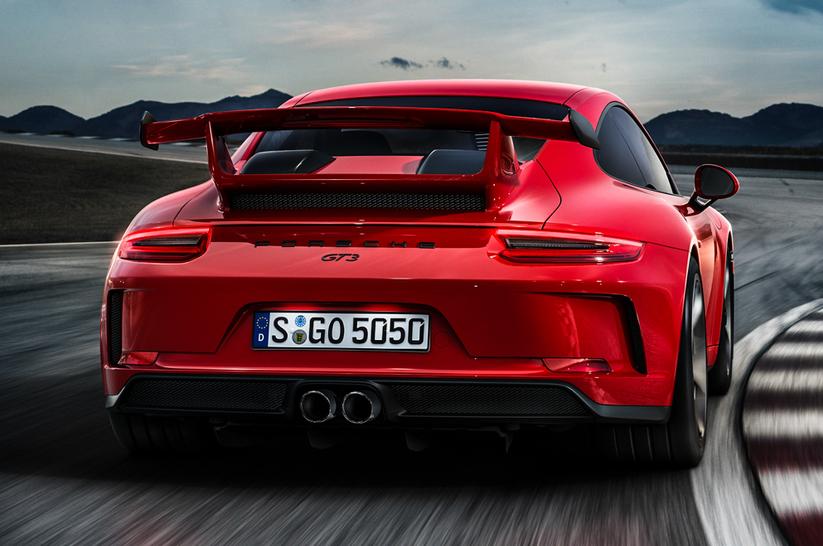 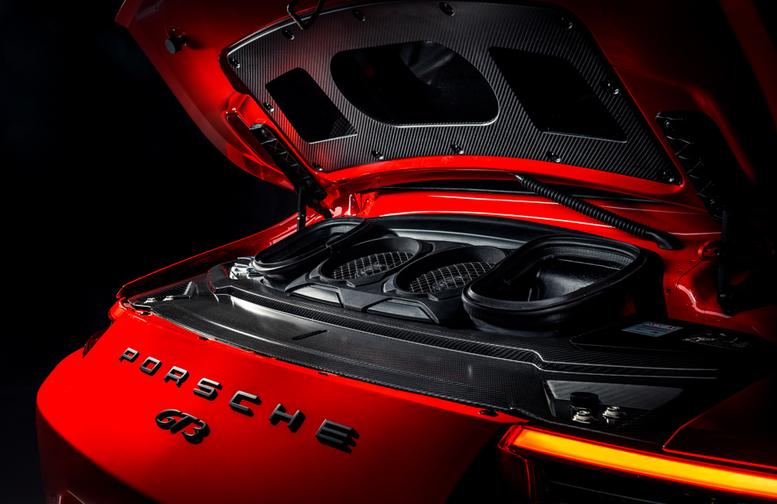 OK kids, fun's over. Now it's time to take a look at Porsche's other Geneva Auto Show reveal, the Panamera Sport Turismo. In my prognostications about upcoming models, I suggested the new four door might be called a shooting brake (British for station wagon). But it's actually a hatchback, which is prolly why Porsche calls it the Sport Turismo. Michael Mauer, director of Style Porsche, calls it "a step forward into a new segment," while reminding us that it "retains all of those value and attributes that are characteristic of Porsche." Among them, everyday usability and maximum flexibility. With its 4 + 1 seating arrangement, large tailgate, low loading edge and increased luggage compartment volume, the Sport Turismo is characterized by its very dynamic proportions that are further enhanced by short body overhangs and large wheels measuring up to 21 inches in diameter. In other words, it looks cool. Finally.

​               Speaking of cool, "at the top of the vehicle, the roof extends into an adaptive rear spoiler whose angle is set in three stages depending on the driving situation and vehicle settings and can generate up to 110 pounds of downforce on the rear axle." Or so says Porsche. The spoiler, which is part of the Porsche Active Aerodynamics (PAA) system, varies in its angle of attack, depending on vehicle speeds.

It ain't over 'til it's over

Two for the show 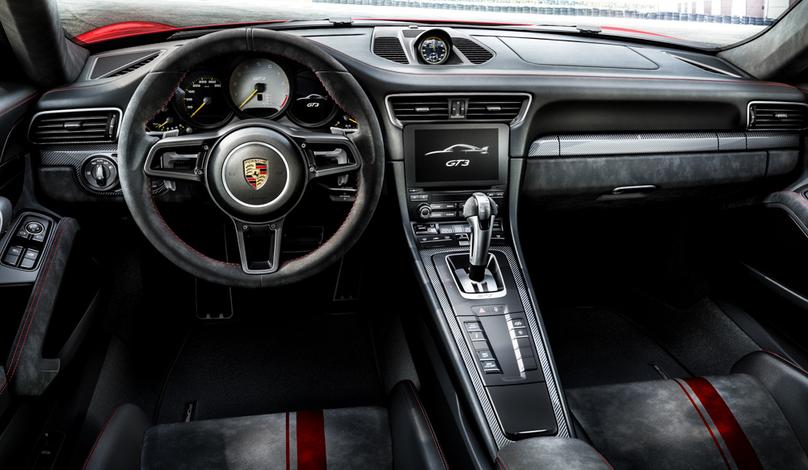 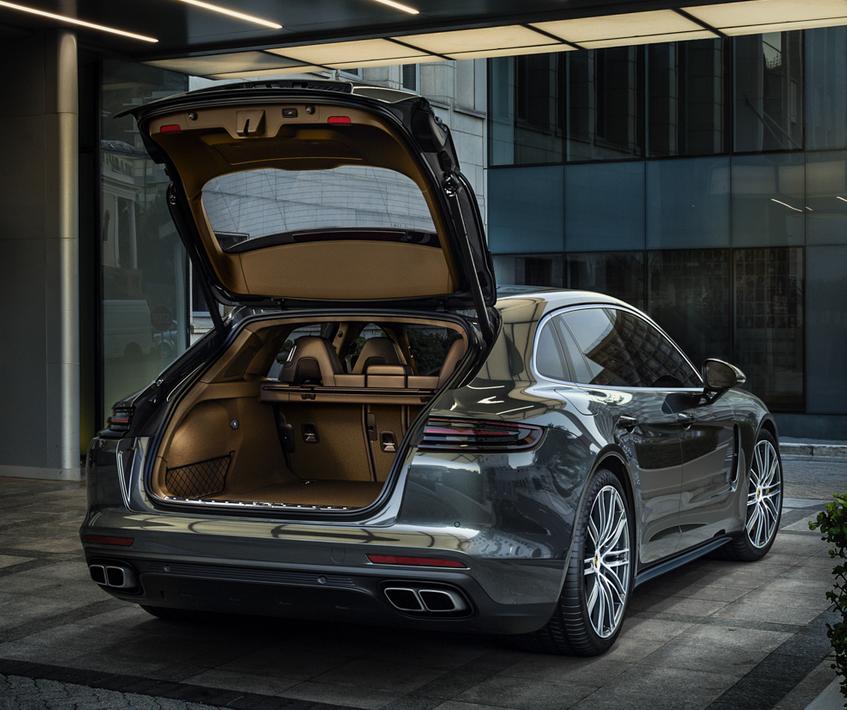 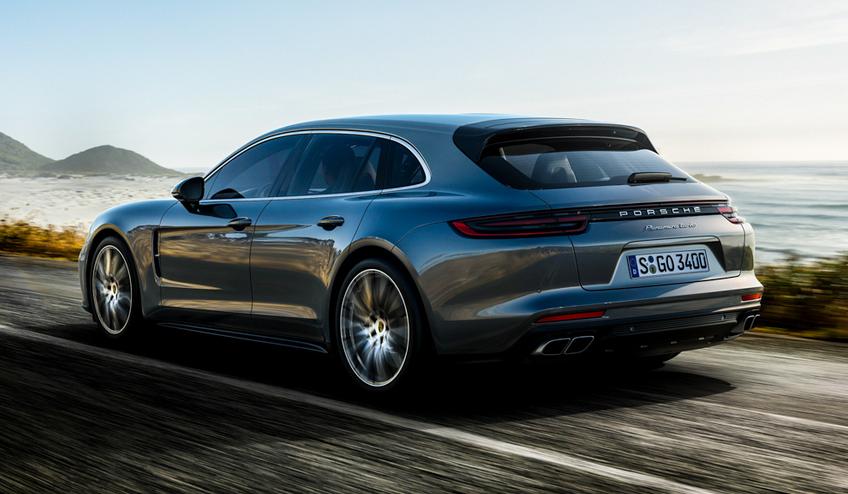 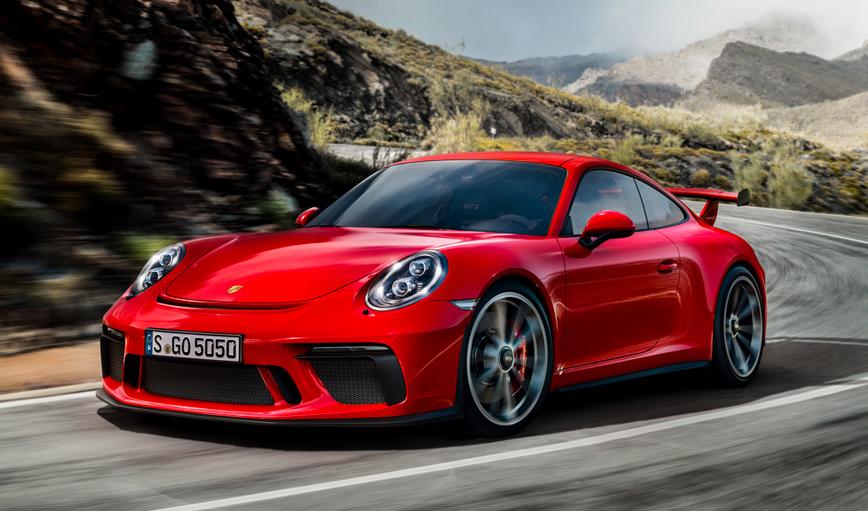 ​For those who can't get enough, here are some more GT3 images

Hold on a second! What was that about  a standard-shift transmission? I should have emphasized that in addition to Porsche's 7-speed PDK "automatic," the 2018 GT3 is also available with a 6-speed manual gearbox, news that has Porsche purists dancing in the streets. Actually, this is really "The Big Story," especially in this day when Zuffenhausen seems to be abandoning manual transmissions in favor of PDK gearboxes in almost every model. But not the GT3-based cars, which continue to serve as the bedrock of Porschedom. In addition to retaining standard-shift transmissions, you can also expect these cars to continue using normally aspirated, flat-6 powerplants. Thank you, Porsche.

​            Now please curb your enthusiasm while I tell you about the GT3 interior, which is set off by Porsche's 14.1-inch diameter GT Sport steering wheel adopted from the 918 Spyder. Electrically adjustable  Sports Seats Plus (fore/aft, up/down) with beefed-up bolsters for better lateral support are standard equipment, while Adaptive Sports Seats Plus with 18-way adjustment, seat-position memory and an electrically adjustable steering column are optional, as are racing-style, carbon-fiber bucket seats with a carbon weave finish. Because the GT3 is a proper two-seater, the rear seat pans are covered.

​             Of course all the aero in the world won't make a poorly designed chassis handle properly (you can put lipstick on a pig, but it's still a pig), so it comes as no surprise that the 2018 GT3 chassis has been fine tuned for improved handling and driving dynamics. Active Rear Axle Steering (ARS) , which aims the rear wheels in either the same or opposite direction as the front wheels, depending on speed, improves agility and stability, muy importante in a rear-wheel-drive car with lots of power (I'll get to that in a moment). A locking rear differential also helps, as do dynamic engine mounts. By the way, the new GT3 sits about 25 mm lower than the 911 Carrera S.

​             On to the heart of the matter, the new powerplant. Remember when, a few months ago, I said that the new Cup Car engine would make its way into other GT3-derived variants? Well it has. In fact, the high-revving, naturally aspirated, four-liter Flat-6, which develops 500 bhp and 339-pound-feet of torque, is fundamentally the same engine that's found in the 911 GT3 R and RSR racing cars. When mated with Porsche's seven-speed, dual-clutch transmission (PDK), the direct injection six hustles the GT3 from 0 to 60 mph in 3.2 seconds, on its way to a top speed of 197 mph. Or 198, depending on whether you round up, as I did converting from the factory's European 318 kph. Meanwhile, the standard-shift-equipped  911 GT3 is even faster than the PDK (mechanical losses), topping out at 198 mph or almost 199 when rounding up. 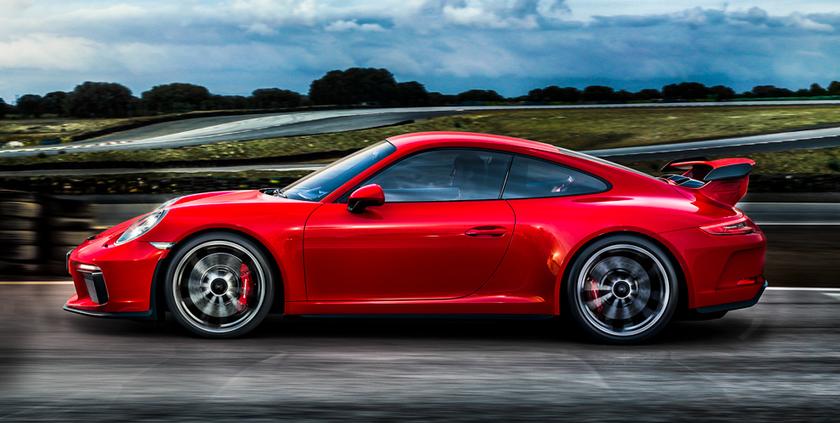 Like all Panameras, the Sport Turismo is loaded with the innovations we've come to expect from the model line, including Porsche Advance Cockpit, Porsche InnoDrive, Porsche Communication Management, Porsche Dynamic Chassis Control and a host of other devices. Porsche Traction Management, an active all-wheel-drive system, and adaptive air suspension, are standard.

Four different Sport Turismo variants, Panamera 4, Panamera 4S, Panamera 4 E-Hybrid and Panamera Turbo, will be available when the new model goes on sale at the end of 2017. Prices range from $96,200 for the Panamera 4 to $154,000 for the Turbo -- excluding Porsche's usual $1,050 shipping and dealer prep fee, which applies to all models. Of course, the 550-horsepower, twin-turbo V-8, Panamera Turbo Sport Turismo, which goes from 0 to 60 in 3.4 sec, is the one to have for those who enjoy life in the fast lane (cue the Eagles).