After spending 42 years at Road & Track Magazine and almost a half century as an automotive journalist, I decided to retire and travel the world with my wife. But cars, and Porsches in particular have a way of getting in your blood and thanks to the internet, I decided to continue doing what I enjoyed, only on a smaller scale. And for free, but I'm not complaining. As my biggest fan, personal manager, and on-site gourmet chef, my wife believes that I still have something to say. About cars and racing and motorsport's Good Old Days. About travel and photography. And about Porsches, because if there's one passion I can't shake it's my infatuation with those cars from Zuffenhausen, Weissach and now, Flacht.  After launching my site with a story on Porsche's Rennsport Reunion V, an all-Porsche, all-the- time event that's held every three or four years, I worried about what I'd do for an encore. I still do. But thanks to Porsche, the hits just keep on coming.

​                 In addition to dealing with breaking news about the latest Porsches,  there's some great things happening in racing that deserve an in-depth look. As for the past, those of you who know me for my four Porsche Sport annuals published in the mid 1970s have probably noticed that I've been posting selected chapters dealing with some of the cars of that era such as the incredible Porsche 917/30. Plus I plan to share a few tall tales from my automotive career. Like when I almost burned down my first sports car (It's OK, Porsche fans, it was a Corvette). Or about the time I attended one of the best planned launches of a new 911 Turbo in one of the ritziest places in the south of France and almost found myself sans car. Stay tuned to find out exactly how it went down. Meanwhile, I hope you'll climb aboard and visit this website often. 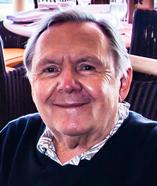